More than a decade before I ever thought of moving to China, I had fallen in love with martial arts films. I especially loved the ones set in ancient Chinese history. While shopping for DVDs back in 2002, if i saw a Taoist or Buddhist monk on the cover, I was easily sold. One image has stuck with me ever since then, almost like a animated gif or Wechat sticker eternally lodged into my mind: a Shaolin monk in a simple white robe stands in his fighting stance, and his absurdly long, white eyebrows flutter in the wind. I didn’t see this in just one Hong Kong kung fu flick, but many — too many to count.

At the time, I thought the image was a bit silly. Part of me always wondered why monks chose to grow their eyebrows out so long. Then again, part of me never cared enough to spend some time actually googling the subject. However, I recently realized that there really was a cultural meaning behind it all, and it came from my usual random-association pattern of thinking.

Over at Dalin Temple, in the eastern part of Changzhou near Wuxi, there is a hall of colorful luohan. The statues look cartoonish with flashy and brightly colored paint jobs. One particular luohan wears a blue robe and standing on a giant crab. His eyebrows are so long, he has two others standing next to him, holding his excess ropes of hair for him. Last time I was at Dalin, I laughed at this the same way I laughed at all those ass kicking Shoalin monks in old Chinese action films.

Much later, I actually made a real cultural connection between luohan statues and all those cinematic eyebrows blowing in the wind. In Buddhism, luohan — or arhat as they are called in Sanskrit — are religious people who have reached perfection. Often, I like to call them the Buddhist equivalent of Christian saints. There are 18 original luohan in Chinese Buddhism. These were the original followers of Buddha. If you want another Christian parallel, you could liken them to the 12 apostles that originally followed Jesus. 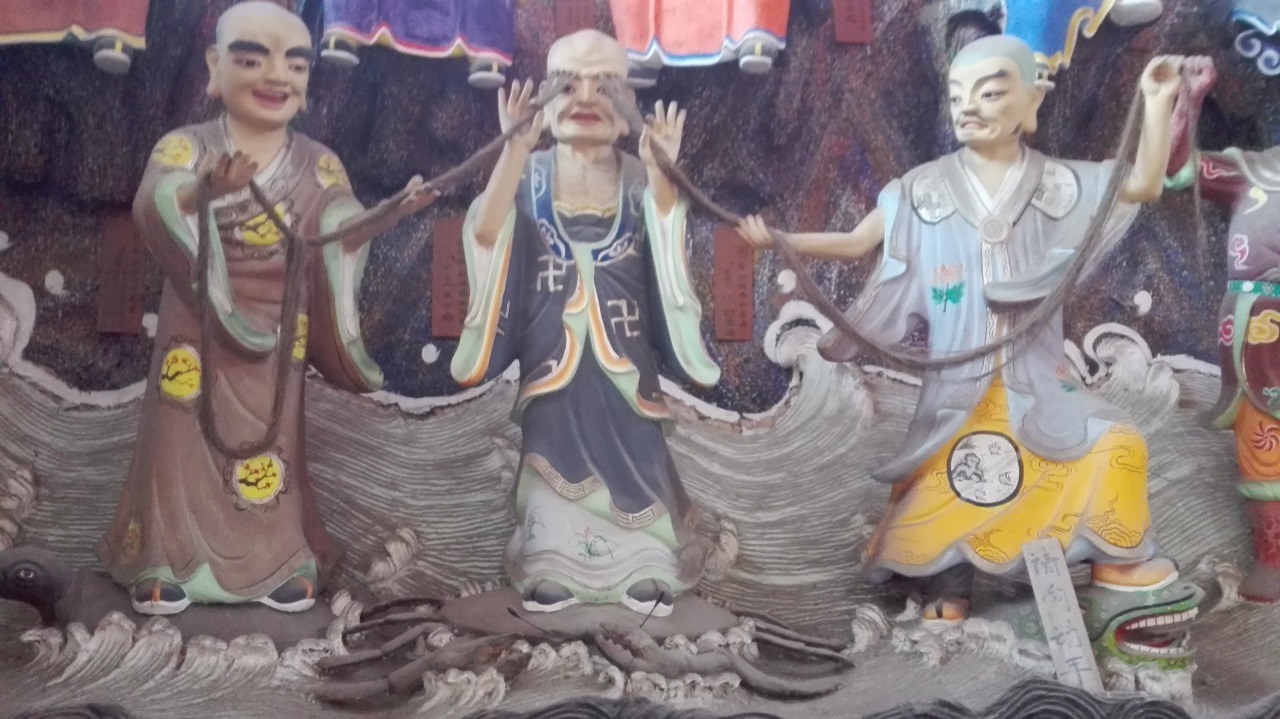 One of those 18 luohan was a man named Changmei 长眉羅漢. His name in Sanskrit was Asita. He was also the person who initially predicted the rise of Gautama Buddha, and that was no small feat. If I am forced to draw another Christian parallel, than maybe Changmei / Asita is a figure like John the Baptist — the final Christian prophet that actually blessed Jesus.

I could be wrong, but what about all those extremely long eyebrows those movie martial arts monks have? Maybe it’s a way of honoring this important figure within Buddhism?

As noted elsewhere on this blog, luohan are the Buddhist equivalents of Christian saints. They are people who have attained enlightenment, but they cannot be elevated higher within the cosmological pantheon. These “saints” also figure big in temple decor and Buddhist art in general.

To a casual observer, the exact number of these luohan in scripture can be confusing. Are there 500 of them? 100? 18? 16? There are reasons behind each number. In the Lotus Sutra, for example, Buddha addresses and gives advice to a gathering of 500 luohan or “saints.” Specifically in Chinese Buddhism, there are 16 with actual names with stories behind them, and later, two more were added later. The original 16 appeared to the Chinese monk Guan Xiu, who made paintings of them.

For me, it’s always interesting to compare interpretations and visualizations of these holy men you can find in Changzhou. At Tianning Temple, for example there are two halls of golden statues in various poses. Over at Dalin Temple in Wujin’s northeastern arm, there is a whole hall dedicated to them. Here, you see them in vivid color. You have luohan with absurdly long legs. One seems to have an arm so long his hand is holding a star or some sort of celestial disk. Many of them are ride animals that are either real or mythical — Chinese unicorns, dragons, elephants, and tigers, for example.  The attention to detail is so tremendous, you could return here multiple times and see something you missed during each prior visit. Each statue comes with plaque in Chinese explaining who is who, but even if you had ability with the language, dust obscures many of them, leaving an casual onlooker like myself with a sense of mystery as to who they are and what their story is.